Rai's murder seems to have ended the last gang rivalry prevailing in the area, and the underworld has become unipolar.
Samajwadi Party MLA Atiq Ahmed is now left in control from Kanpur to Allahabad, while the area from around Allahabad, Varanasi and on to Ballia is Ansari's domain.
RJD MP Mohammad Shahabuddin holds fort from Ballia to Siwan in Bihar.
The three are in close nexus, sharing information, shooters, and forming a drug and gun-running ring.

source:www.ndtv.com
what is the home minister doing? Probably Raosaheb Ramrao should be sent tellimg him that these dons run dance bars there.
Posted by amey ashok kulkarni at 10:16 PM No comments: 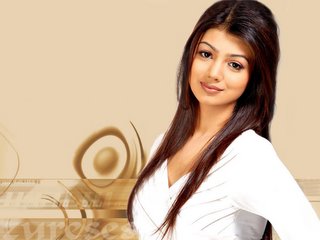 Off late my friend has been irritating me by criticising Lara. So Varun a detailed analysis will come out by next year. My reading, writing, poetic, researching all such skills will come out of the project. Actually I wanted to carry out a career analysis of Lara and u have given me the extra reason.Remember, I have never compared Lara with Sachin- u were the first to bring in his name.
Till that time enjoy this pic. One thing Varun I will chose u even in front of her( got the message?) though it would be a very difficult choice. I am calling truce with u-stop Lara bashing.
Posted by amey ashok kulkarni at 10:42 PM 5 comments:

Should Lara suffer the same fate as Waugh and Taylor? 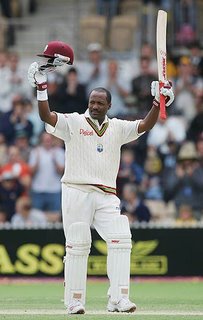 Well the above are the statistics of Lara. One can easily read the pattern. In a team whose batsmen who don't even average 40 Lara is performing consistently. He has also retired from one-dayers to prolong his Test career. And don't forget his mentoring of Sarwan and Bravo, the latter attributed his century ar Brisbane to Lara's advice.
Posted by amey ashok kulkarni at 1:26 PM 1 comment: 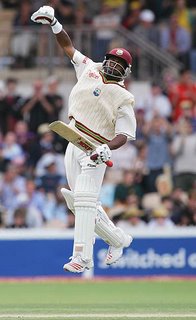 Dancing to the tune Singer Varun 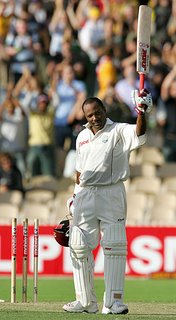 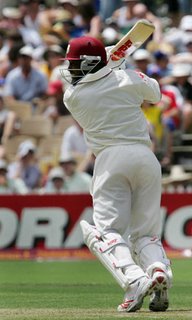 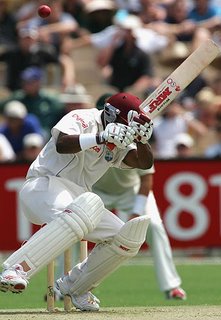 The first image shows Lara struggling, the second taking the pains of the effort and the third shows his subdues celebration and humble acknowledgement to the overwhelmed crowd.

I will finish off with this quote from cricinfo
"Poor umpiring decisions have been a major reason for his difficulties as the series was lost in two matches, but Lara did not complain and set about rectifying his personal situation with an innings most geniuses wouldn't have bothered with."
Posted by amey ashok kulkarni at 12:00 AM 1 comment:

There was rioting in the BJP office in Patna because Modi was made deputy CM instead of Chaubey or Yadav. Now few years back the BJP could declare itself a party with a difference. But then what can one expect given that the BJP president is going to step down just now at the age of 79. The challenge in Bihar is performance that is visible. This is going to be difficult- more thatn anything else there needs to be attitudinal change and this could be termed as easy as it might be classified difficult.
Lets hope the tag of cultural heartland of India becomes its economic heartland as well.

Lot is being said about the Right to Information Act and how it will change the way in which governance is carried out. But I was just wondering y weren't ppl od Maharashtra informed enough that the state had a similar act before the central act was enacted. Maybe the government employees will far more used to the act.
I would also like to write about the tribal Act but not now- too tensed with the exams.
Posted by amey ashok kulkarni at 10:00 PM 1 comment:

It is hilarious to know that the Shiv Sena candidate from Malvan couldn't even save his deposit. This is what happens to a party which ridicule's popular leaders. The popular leaders may not be good, but they win u elections. There is a message for BJP in this- Uma Bharti must be treated with more respect.
Udhav Thackray has alledged rigging in Malvan and he not even as graceful as Laloo to accept defeat. Its time the reins of Shiv Sena are handed to Raj. He is the person who can enthuse some life into the dormant Sena.

Now to Bihar. It has been a major victory for NDA. SOme factors that contributed to their victory-
1. upper caste votes
2. Most backward caste votes
3. Muslim votes for JDU (at least thet didn't vote aggressively against the BJP)
4. General discontent with RJD:Laloo lost heavily in the Muslim-Yadav belt.
There is one thing the BJP can do. Tow the Hindu line but don't antagonise the Muslims and make them vote against you- exactly what Sudheendra Kulkarni said. The BJP can get votes from the common Muslim.
Posted by amey ashok kulkarni at 4:40 PM 4 comments:

Reservation for Muslims in IITs and IIMs

Is there anybody out there who can tell me how to officially convert to Islam so that I can benefit from the proposal to reserve seats for Muslims. This year the change is not going to occur, but if I don't get through CAT, I want to make sure that by the next time I appear for CAT, I am a Muslim on paper.
Comments appreciated.
Posted by amey ashok kulkarni at 8:14 PM 3 comments: 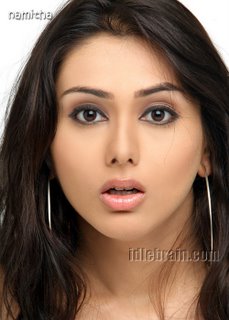 I have to do the OOAD submission in 2 days and have just started with it. whenver I sit with paper and pen in front of me, I just can't think anything up. This subject is driving me to the edge os my senses. A couple of years before had I faced this subject I would have definitely had a nervous break down, but 3 years in SPCE and that too electrical and I have learnt to do things however difficult they are.
The other day Varun put up a nice pic and I am still mesmerized by this gal Namitha. So I did some google for her and got hold of a few stunning pics. She is damn beatiful man.
Posted by amey ashok kulkarni at 9:23 PM 4 comments: