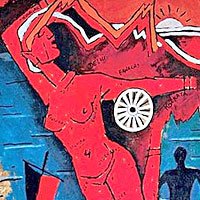 We all have heard, read and may have even witnessed the violent protests by Muslims all over the world. Though I would be commenting on them in my next post, I would like to state some facts and awaken some dormant people.

Maqbul Fida Hussain-the great Indian painter whi was mad after Madhuri Dixit had recently painted a nude painting of Bharat mata. Why are Hindus protesting against it?
Their religious feelings are hurt, why? Goddess is a concept only in Hindu relogion. Muslims don't worship anyone other than Allah. Hence they also refuse to sing Vande Mataram.
Hussain'spology doesn't count because he had painted Hindu gods nude a decade ago-Hanuman, Sita, Saraswati, Ganga, Yamuna etc. Does anybody protest that? What are the Hindus doing?

For the freedom loving people, why doesn;t he draw nuse pictures of Prophet Muhammad's daughter or the Prophet having sex with his 81 wives and innumerable concubines?
Why does he find only Hindu Gods?

To those people who prefer to be secular Hindus- what will happen to your own religion if u keep shut and accept all insults and onslaughts. Secularism is not non-religiosness.
I am putting up one of the nude paintings drawn by MF-this is just to reinforce my point and for those who might think that I have cooked up an issue.
The picture has been taken from MF's own website.
Posted by amey ashok kulkarni at 12:08 AM

Bhise start a public signature campaign similar to the one you had started for the French naval ship.

Bhim, AFAIK, there was a huge hue and cry @ the saraswati paintings as well.So please check your facts before putting on such garbage.

Another thing, is something called dignity. No religion gives any right to malign any other religion. If the dignity of any religion, be it the hinduism or Islam be harmed, the people have every right to get outraged; not even god has the right to draw such derogatory paintings.

Now when I am saying this, u do this when u defend your religion.
U have every right to do that.So MF hussain has no right to draw such paintings.

My ideology for the last time, in true simple words to you morons is this:
let the individual decide his religion. But then again, no person has the right to malign another religion.If he does, he certainly deserves punishment.

End of story, hope u make some sense of it.

FO man,
this is ****ing ideology...
Wat the hell has been done to muslims...
Paigamabar isnt shown having sex or something..and why the hell are they burning buses and cars in India where there is nothing related to cartoon and one more thins..who the hell has given them right to spread fatwahs for killing ..
are they god...
these bastards shd be fucked...
if they want to protest..protest in proper way..violent protests have become a habit for bastard muslims...
they deserve a deep fucking and not dignity..
and as far as i think now...
everyone shd come forward and start maligning islam...or else they will continue this CHu****giri..

I must be getting old or something...

I had to hunt for the nude in the painting when I glanced at it first.