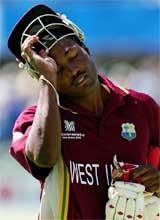 After observing lara in the Super Series one day games a notion in my mind for some days has got a concretised. See his attitude on the field, its like he is some big hury. He doesn't give himself any time to settle down and get his eye in. He starts with his strokeplay as soon as he arrives at the crease and plays some senseless shots which are categorized as awesome but only when he is in form (at the crease for large enough time). He just gets out playing those big drives so early in his innings.
What I feel is that, Lara's time in one days is over and he no longer has the attitude and temperament for this form of the game. He should concentrate all his efforts on the Tests where he is an angel and it is for Test cricket that he is born.
Posted by amey ashok kulkarni at 5:52 PM

see how this song suits.....
It goes on the tune of the adnan sami no....Gela Gela (Aitraaz)

lara is a potent player even now... but the super series is the biggest Flop the world of cricket has ever seen.

My prediction..Aussies win the test and the one day series(2-1).....Ya ya.. they might probably gift them a game so that....people continue to watch cricket...