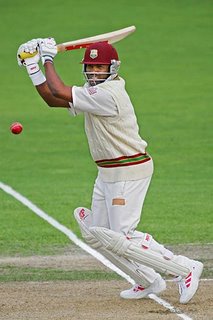 slept yesterday night at 2.30 am (was having a long chat with my father) and got up at 6.30 just to wake up to wet outfield and a delayed start to the West Indies Vs New Zeland Test. Play started and Lara came into bat in half an hour. watched Lara with anticipation and apprehension

Observations: lara had changed his style. His bat usually kisses the ground just before the bowler delivers the ball. Now it was hanging in the air. Maybe he wanted to be sure of not being late playing the ball. He was not having the extravagant "run" towards his off stump thus in the process exposing his leg stump. As a result he was able to leave deliveries that were much closer to his body.
Where do u see the world's leading run scorer working so hard and re-inventing himself after playing 15 years at the international level. Thats the grit, determination, flexibility and desire of Lara.
I get a feeling that a big inning is in the making. If not for the big score, one should see Lara bat for the patience, perseverance and determination to succeed whatever the odds that is reflected from his face and for the humility and honesty that he epitomises.
Posted by amey ashok kulkarni at 9:18 PM

Told u before... telling you again:

My guess is: POwer Systems!!!

Varun, whatever u say, I am not interested whether Lara is better or Sachin. I know Lara is the most talented and flamboyant batsman
And most importantly I just love watching him bat-its a bliss.
About the topic of the discussion with my father- its ws not power systmes, varied, a lot of things from the ordinary, existential to philosophical.

Sometime having chat with ur family members is really refreshing

reached till ur blog by blog hopping

i agree with u but i am agetationg agains the the 1 who does not deseve the wealth class.

the poor peopel deserves the resevatins.